My mom was born in Posen, Michigan, located in the northeastern tip of the state (or the pointer finger of the mitten, for you Michiganders out there).  This village boasts a whopping 234 inhabitants as of the last census, 61% of whom are Polis 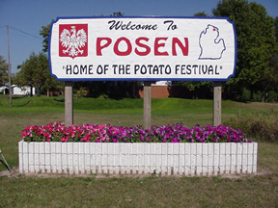 h.  That is the largest percentage of Poles anywhere outside of Poland.  The town’s claim to fame is that it is the Home of the Potato Festival.  Hey, don’t mock it until you’ve been to the Festival.  It is legendary.  Do you like beer, sausage, and polka? Then you are in the right place, my friend!

My mother’s parents were born in Posen, and their parents were born in Posen.  And yet Mom’s first language was Polish.  Most of the food she ate was of Polish origin.  She went to a church where mass was conducted in Polish.  This little village, with one traffic light and a few dozen inhabitants, continues to mystify me.  A tiny enclave of people who for over a hundred years have lived just as their ancestors did in the old country…well, with the exception of the IGA grocery store.

We used to visit our grandparents in Posen pretty regularly. My childhood memories from those visits are an amalgam of old world Poland and typical midwestern country life.  I remember most of the surnames uttered in Posen- names like “Wozniak,” “Chalupniczak,” Woloszyk,” – to have an inordinate number of “z”s and “w”s that sounded like “v”s, none of which seemed to belong where they were placed in those names.

The next door neighbors had a menagerie of animals, including a pet deer, a peacock, and Joe the Talking Crow.  Joe could wolf whistle, sing songs and say, “Wow,” “Foul Ball,” and “Verna” (my grandmother’s name).  According to Grandma, he also hated when people wore black. So apparently he was either fashion conscious or disliked funerals.  I’m not sure.  Regardless, he was part of the exoticism of Posen for us kids.  Who in the suburbs has a peacock, Bambi, and a talking crow living in their backyard behind some chicken wire?

Grandpa had a hunting camp out in the woods, which was mainly used by the men in our family to drink Schlitz, eat sausage, and occasionally shoot a deer.  We went out there sometimes and loved to run up and down the stairs of the log cabin Grandpa and his brothers built, and take turns using the outhouse.  That’s right, suburbanites, no indoor plumbing out here!  Just a wooden bench with a hole.  Enjoy.

One time we walked into Grandpa’s garage, looking for the croquet set to get a jolly game going.  We were instead greeted with the hanging carcass of a deer, skinned and ripped open, with glassy eyes staring blankly at us.  Our screams reverberated throughout the town.

Grandma and her meals were famous across the land (or at least across the one square mile that is Posen).  The house was filled with delightful smells day and night.  For breakfast, there was always homemade sausage, paczki (pronounced poonch-key for you yokels) which were potato doughnuts filled with homemade jam from Grandma’s garden or smothered in frosting. There was other traditional Polish fare, borscht, pierogi, golabki, and czarnina (duck’s blood soup-blechhh). Gosh, I need to get those recipes.  Well, except the duck’s blood soup.  That I could live without.

Posen may be small and countrified, it may not even show up on Google Earth, but there is something fascinating about a town that holds the history and traditions of a people long after the rest of the surrounding world has assimilated.  Like Brigadoon, it is a secret hinterland, unbeknownst to the rest of the world, that is home to a community of people who closely guard their heritage and identity, who care deeply for each other, and who know how to cook venison like nobody’s business.