When we were young, Pops never talked about it.  The only reason I knew he had served in the Army was because my aunties had photos of him in his uniform.  As he grew older and we grew up, he began to talk about his experience more.  Here’s what I learned from Pops:

“Who describes going to war as fun?”

“Hah!  Ho-ney, I had a bunch of goofy guys to keep me company.  There was Jones, Jones, and Jonesie.  There were the Puerto Ricans.  They followed me around because I would talk to them in Spanish.  My sergeant couldn’t say my name so he just called me Monday.  Everyone called me that.”

“Yeah, but what was it like?  Did you have to, you know, go into battle and shoot your gun?”

“Yeah!  Haha!  One night I was on duty, watching the enemy camp.  And the Chinese sniper was sitting in his place watching me and I was watching him back.  I was getting bored, so I just shot my gun, aimed it about 3 feet over his head.  And I waved.  And he shot back about 3 feet over my head.  And waved back!”

“Yeah!  It kept us both awake while we had to be on duty.”

“My father, the sniper comedian.”

“Then there was the time I got shot.”

“We got ambushed and I had to get my guys out.  Some of them got hit, so I was pulling one of them out and got shot right in the ass!  It stung like crazy!”

“I kept going.  I had to get my guys out of there.  I went to the med later on and he looked at it and said, ‘That little thing?  You’ll be fine!’  They patched me up.  No problem.”

(To this day I wonder if the screenwriters for Forrest Gump heard Dad’s story and used it.  Just saying.) 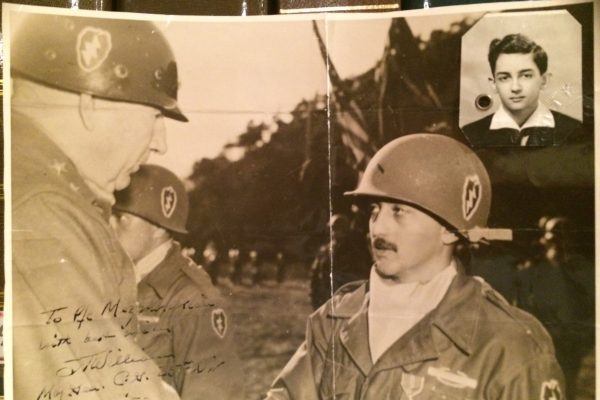 What my father failed to mention during his account of shenanigans on the battlefield is that he was given the Bronze Star, the fourth highest military award, for his heroism on the field and for putting his life at risk to save the lives of his fellow soldiers.

I think the war influenced my father in a lot of ways he never told us about.  He told us the stories that he was able to put a lighthearted spin on, but he had his demons that he never shared with anyone.  I saw it in his eyes.  There was a lifetime of memories he tried to tamp down that would never leave him.  But he came home to his family safely, he had a wonderful and rich family life, and he loved this country and was so very proud to have served.  He never gloated or advertised to anyone about serving in the military, but he always stood up a little straighter and his voice went down a couple of tones when he was addressing another man in uniform.

On this Vet’s Day, I celebrate my father’s valor and sacrifice.