On Saturday, over 700,000 people will be marching in 386 countries around the world as part of the Women’s March on Washington. I will be one of the many in this ocean of people who are committed to valuing our humanity, to promoting peace and equality for all, regardless of gender, race, color, creed, or sexual orientation.

Yesterday, I took my family to the MLK Memorial. As we strolled around the memorial, I took note of the diversity of the crowd. People from multiple generations, races, and nations were taking pictures by the quotes that had special meaning to them. Children touched the words and asked their parents, “what does this mean?” Parents explained the simple message of a man who believed that regardless of what we look like, we can answer to the higher calling of seeing the light and humanity in others and walk side by side as brothers and sisters, free of hate and fear of one another. His words, carved into the stone on the wall surrounding the memorial, brought me to tears. They carry even more weight now as we look at the c 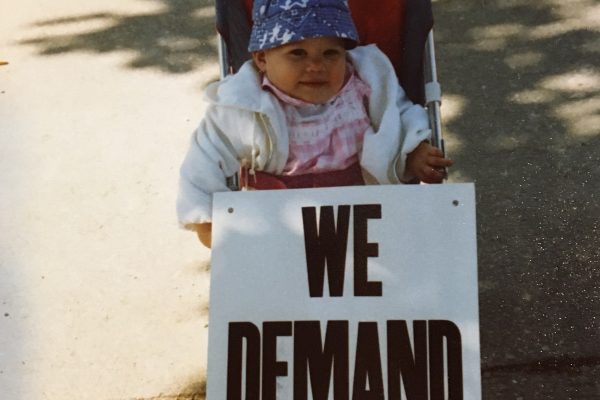 There’s a picture that I dug up in an old photo album that has always given me a laugh, but also has consistently through my life whispered to me of my purpose on this earth. I was a year old and my parents took me to a protest. Their teacher’s union was on strike because of disparities in wages for educators who gave so much of themselves tirelessly to the pursuit of preparing the next generation.

In the photo, I’m sitting in my stroller with my little sunhat, with my chubby face lit up in a big grin, and a huge sign propped against me that says, “We Demand Equity.” The photo was obviously taken at the time because it was cute and humorous.  And yet, I have returned to that photo over and over through the years. It was like the “me” from the future was reaching back through that photo and saying, “this is more than just a funny family picture. This is who you are. This is what you are meant to do.”

Because of that whisper, I have a rainbow flag waving gently in front of my house. I have a sign in my yard that says, “Hate has no home here” in multiple languages.

Because of that whisper, I read my children stories of men and women who have been strong in the face of adversity, who didn’t listen to those who told them what they couldn’t do, who achieved great things in spite of harsh and unfair treatment.

Because of that whisper, I have devoted my career to researching and teaching others of the price of prejudice on our society, and the opportunities we can uncover when we seek to understand and value others who don’t look or act like us.

Because of that whisper, I will march alongside men and women who share my dream that we as humans are capable of building a world where everyone truly does have equal opportunity for a healthy, happy, fulfilling life. Where women’s rights are human rights. Where black lives matter. Where love is love. Where people can practice their faith without fear of abuse.

Because of that whisper, I will follow in the words of Dr. King:

“Make a career of humanity. Commit yourself to the noble struggle for equal rights. You will make a better person of yourself, a greater nation of your country, and a finer world to live in.”

0 thoughts on “Listening to the Whisper”