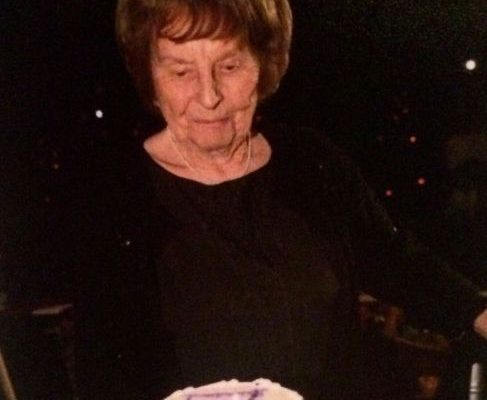 My grandmother, Verna, is 97 years old.  She was one of ten siblings born on a farm in Posen, the Potato Capital of Michigan (for you troglodytes who have never heard of it).  Her mother lived to be 101 years old.  Grandma keeps insisting she doesn’t want to live that long but I think she secretly wants to break the record and make it to 102.

Grandma spends her days baking pies, cleaning her already pristine house, and visiting the “old folks” home next door, where she entertains people twenty years her junior who are in worse shape than she is.  She mainly goes over there to massacre them at cards.  She’s a total card shark.  Don’t trust her sweet innocent face.  She’s merciless.  I have never survived a game of Skip-Bo with her.

A couple of years ago, she needed a hip replacement.  We were a little concerned that it would slow her down to have such major surgery.  She was racing around a few weeks afterwards, saying, “I feel like I’m 55 again!”

When I was a kid, I just knew Grandma and Grandpa as relaxed retirees with a kickass condo in Florida, who enjoyed traveling the world, catering to their grandkids, and giving back to their community.

When Grandma and Grandpa first married, they were living in a garage that they had turned into a one room apartment.  She cooked and kept house and took care of her husband, who worked insane hours working for the family business.  Often he would come home late, with business associates, and Grandma would cook for the lot of them.

She raised four children.  She lost her oldest and youngest, both too young.  She lost her husband too young, and has lived for almost 20 years on her own.  I’ve never once in my life heard her complain.

Over the holidays, I called to wish her a Merry Christmas and catch up.  Her response was, “Listen, can I call you back?  Your cousin’s boyfriend’s grandma wants to FaceTime me.”

It’s fascinating when you think of what the woman has seen over the span of almost 10 decades of life.  A century of world wars, technological advancements, economic booms and collapses, fashion fads (she’s seen every trend at least twice at this point), cultural and social norm changes.  I’m exhausted just thinking of it all, yet she still hasn’t run out of steam.

I asked Grandma what the secret to her longevity is.  She looked me in the eye and said, “I eat bacon every day for breakfast.”

There you have it, folks.  Mystery solved.  Sorry, Vegans.