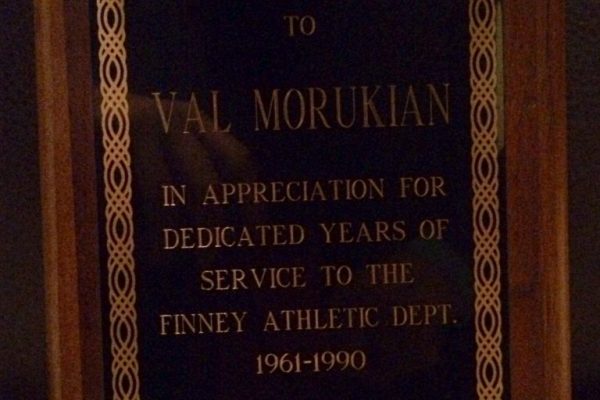 Watching football reminds me of my dad.  Yes.  The diminutive Armenian/Cuban goofball who probably came up to the elbows of most of his players was a badass high school football coach in Detroit public schools.

I have the photos to prove this.

Some choice memories from his fellow teachers, coaches and students…

Mr. Banka, who became Dad’s assistant coach for the junior varsity team, told me about his first away game with “Coach.”  They hopped on the bus, and Dad lit up a Churchill and started puffing away, after politely offering one to his assistant.  The students appeared unfazed by this  (It was the 60s, mind you…anything went back then).  About halfway to the game, my dad called out the bus driver to pull over.  He chewed on his cigar and said through clenched teeth, “You coming?”  and proceeded to step off the yellow SCHOOL BUS and enter a dive bar.  The barkeep nodded familiarly to my dad and slid a couple of shot glasses over to the end of the bar.  Mr. Banka stood there, astounded, while my dad downed a shot of whiskey and said, “drink up, we got a game to play.”

Bobby, one of Dad’s early players who then became a close friend of the family (his kids were roughly the same ages as we were so we used to all play together), told us about how Dad used to yell and scream at them and reach up as high as he could to clock them on the heads with his clipboard.  Again, simpler times back then.

I remember as a little kid driving in the mini van and Dad listening on the radio to the Michigan game.  All of a sudden he started yelling “JEEEZZZUS CCHRIISST, HAIL MARY!”  I was really confused because it wasn’t Sunday, and we weren’t heading to church.  I asked him if he was praying.  He laughed for about five solid minutes and then said, “yes, I guess so, ho-ney.”  No wonder I’m such a faithful Wolverine.