My dad had a fairy godmother.  I guess that’s what you could call her.  Blanca La Negra was a  santería priestess (or bruja, as my auntie referred to her), who lived down the street from Dad and his mom and sisters in Havana. 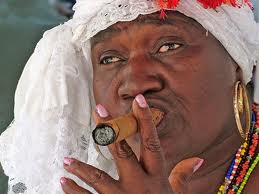 Dad would tell us tales of how, when he was a little boy, all the other kids would run screaming from la bruja negra, but she took a liking to cute little Florentino (my dad’s nickname in Havana because nobody could pronounce Varujan).  He would sit on her porch with her and listen to her stories and help her around the house.  Auntie Meline was horrified that her baby brother was hanging around with the neighborhood witch, but my grandmother saw no harm and let her son do as he pleased.  (Besides, Mezmairik had a bit of a reputation for her own supernatural powers among the neighbors, so it’s not completely surprising that she didn’t blink an eye when Dad and Blanca would visit one another…that’s for another blog post).

Dad used to say that Blanca was like his guardian angel, and with her help he had miraculously escaped several close brushes with death.  There was the time he almost drowned when he fell off the Malecón and at the last moment was pulled to safety by a man who just happened to be passing by and dove in the water to save him.  There were numerous incidents in Korea where he was shot at by the enemy, once when he was almost accidentally shot in the face by a buddy, and of course the time when he was actually shot (in the ass…quick thinking, Blanca!).  There were numerous car accidents, drunken bar fights while he was tending bar in downtown Detroit, the riots of ’67, and too many other incidents to count.

In his later years, when Laura or I would fuss at him about taking care of himself, make his doctor’s appointments, or call him to check he was taking his heart meds, he would reply, “Oh ho-ney, you worry too much.  Blanca is looking out for me.”  I replied that I thought Blanca’s angel wings were probably getting tired and maybe he could do his part, as well.

I remember once Dad told me that Blanca had informed him about when he would die.  He reassured me that he was going to live until he was in his 90s, just like his mother and aunts.  I snorted derisively but deep down felt a sense of hope that maybe Blanca had foreseen him living to a ripe old age.  After he died, I realized Blanca may have given him an honest prediction, but if so he had chosen to keep the truth to himself.

I believe in Blanca.  I believe there was an old, wise woman on that dim street in Havana who took a shining to my father, and recognized the ancient soul that lived within the small boy.  I also believe Blanca had her work cut out for her trying to keep my accident prone Pops alive all those years.  They’re probably sharing a cigar and a laugh right now.

One thought on “Blanca”